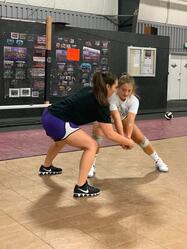 ​Private volleyball coaching gives athletes the ability to have their coach spend some one-on-one time with their athlete giving instruction on their personal position and helping elevate their overall game. This focused approach gives privately coached athletes a competitive advantage. On the whole, private lessons are a perfect way for volleyball players trying to get the most out of the game improve their talents and become a more competitive athlete.
All athletes, regardless of club affiliation, are welcome at Puyallup Juniors for private lessons!

Payment in the form of a check or cash is payable to the coach and is due by the start of your lesson.

Private Lessons will be held by: Mandy Flores-Handley 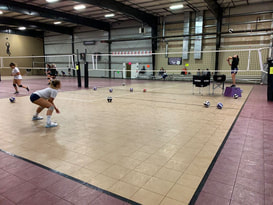 ​Coach Flo has been around the game of volleyball for 34 years, playing and then coaching. Coach Flo has played every position, starting as a setter, moving to an Outside/Opp in HS and a Middle her Senior year of HS. She attended PLU as a Defensive Specialist from 1996-1999 being a part of the programs First NCAA Conference Championship team (1999). FLO broke the PLU aces in a season record in 1997 with 77, a record that still stands to this day and between 1996-1999 162 aces. In 2000, she was Named PLU's Athlete of the Year. She also competed on the Softball team that went to Nationals her freshman year and finished 3rd in the Nation. 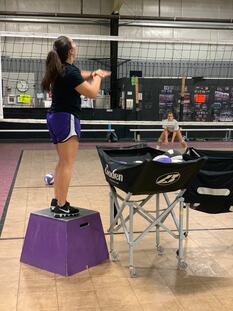 ​In 2001 Flo joined the Rogers HS team as a JV coach and became the head coach from 2002-2012. Her team made 8 straight district appearances from 2005-2012 and earned state appearances from 2006-2008 and again in 2011 earning 6th and 7th place finishes.
In 2010, Flo joined the LT club where her teams earned 5 National Bids (2 at PNQ, 1 at Farwestern and 2 at Regionals). Her team won Nationals in 2015 for the Patriot Division. In 2015 Flo was Inducted into PLU's Hall of Fame for volleyball/softball.
Flo has been providing privates lessons for the past 10 years. She is also currently an Assistant Coach at the University of Puget Sound! She brings a lot of experience, knowledge and passion.